The New York City Department of Education is requiring all employees to undergo 'Foundational Implicit Bias Modules' and provided a glossary of "key equity terms and concepts" including:

- "White Privilege," defined as "The unearned power and advantages that benefit people just by virtue of being White or being perceived as White."
- "White Fragility," defined as "A range of defensive (and centering) emotions and behaviors that White people exhibit when confronted with uncomfortable truths about race. This may include outward displays of emotions such as anger, fear, and guilt, and behaviors such as argumentation, silence, and leaving the stress-inducing situation. These behaviors, in turn, function to reinstate White racial equilibrium."
- "Violence," strangely redefined as "A primary tool of oppression used to acquire and/or maintain power at the expense of the physical, psychological, social, cultural, political, and/or economic safety of others."
- "Equity," defined as "the effort to provide different levels of support based on an individual’s or group’s needs in order to achieve fairness in outcomes."

Modules depend on validity of implicit bias, yet the utilization of such a concept is not well-validated by science and has been shown to decrease workplace productivity and increase colleague hostility:

During Module 2 video presentation, presenter unfalsifiably asserted that "attitudes and stereotypes...fill the ether" and then imagined opposition to implicit bias training as people who don't want "to be told that [they're] bad" and further admitted that it's "really scary" to imagine that "I'm going to be held responsible for things I'm not even making decisions about." Presenter additionally noted that tackling implicit bias is necessary in "breaking down big systems of oppression." 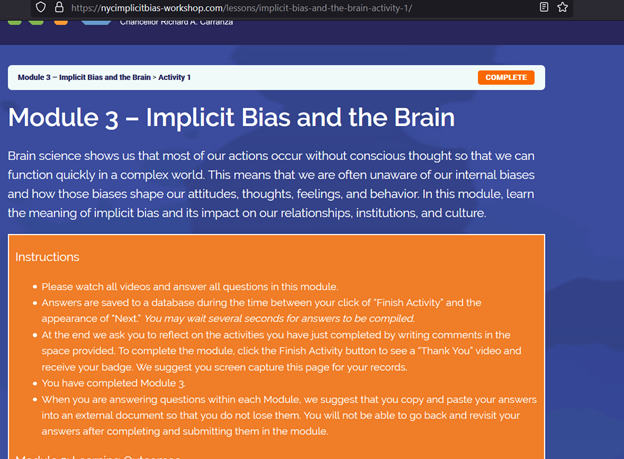